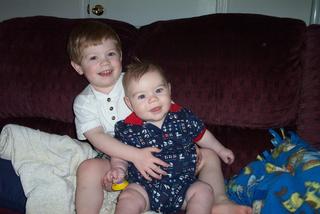 Well time for ear tubes again. This time for the youngest of the twins, Gabe. He now has his fourth ear infection and he is only seven months old. He is miserable right now won’t eat and can’t sleep. You can tell his ears are bothering him. He’s like his older brother and anytime he gets a stuffy nose and some drainage, time for the ears to get infected. We are hoping and praying that his hearing is not being affected. He doesn’t seem to be as reactive as he was. Hopefully it’s just swelling nothing more serious. Misty is going to call the specialist that performed Colby’s surgery and get the ball rolling. I know it’s tough on them, but if Gabe reacts like Colby did, then things will be hundreds time better for him in the long run. I know this type of surgery is done everyday, but a friend of mine once told me that minor surgery is surgery done on someone else’s family. Once I know more, I will post it.