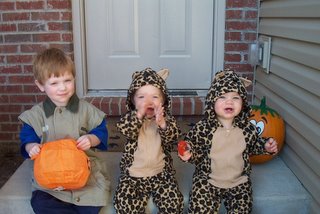 Well, another Halloween has come and gone and still Colby won’t go Trick or Treating. Even the free candy won’t do it. He went to one house last night and after getting candy, looked at me and said he wanted to go home. Living in a new sub-division we didn’t know how many kids we could expect. We didn’t want to have a lot of candy left so we didn’t buy to much. In the end, we bought way to much. We had a total of 2 kids. Yes two. It’s a new area and downtown had something going on for the kids so that may have played a part. Maybe next year Colby will be more into it. It was better this year than last as he had a total fit on us.
Also, there was a 1st grader here in Jessamine Co. who was hit by a car going to a local church’s Trunk or Treat and is in critical condition at UK Hospital. Just pass along a quick prayer for him and his family.
dj