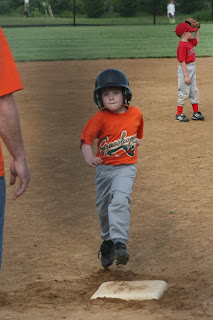 Well the season is over now. After 15 games, we are now 0-15. The team had a lot against them from the start. Three players quit before the first practice which only left 11. So if three can’t make it, then the team had to forfeit. Also with fewer players, we couldn’t take advantage of the rules that allow extra infielders. Also, some of the teams had players a lot older than ours so they were better.

But the players played great and got better each week. Because of rain outs, we ended up playing the same team three straight games. We played them last in the rotation so they were the last team we were to play during the regular season. Well the first game against them got rained out so they put them at the end of the season. Well they were also the No. 1 seed in the tournament so we had to play them in the first round.

The season has opened my eyes up for some things and some possible new oppurtunities for me at church. More details later 🙂

Anyway, I am proud of Colby. He has gotten better all season and his hitting has really come around. He hit a 2 rbi double today and may have gotten a triple if he had paid attention to his first base coach. He just paid attention to the bal and hit it sharply to the shortstop and it got by her and into the outfield. He headed to first and didn’t see the first base coach motion him to second, by the time the outfielder got the ball into the infield, Colby was to second.

Colby loves Tball and baseball so this is a sport for sure we will see a lot in the future. 🙂